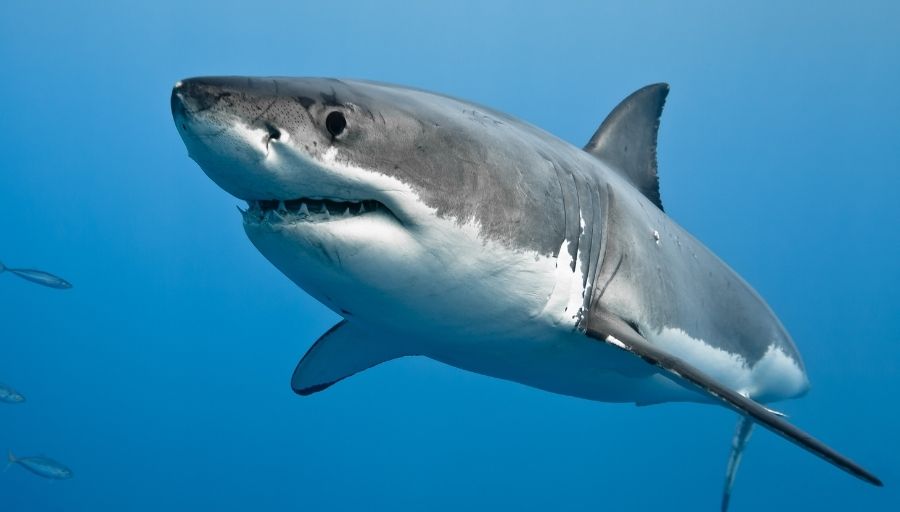 The lifespan of a Great White Shark is about 70 years. The Great White belongs to the order of sharks known as the Lamniformes and is one of the largest predatory fish in the world.

This predator remains one of mankind’s most feared sharks, both due to misinformation and due to the shark’s occasional tendency to attack swimmers, surfers, and divers.

However, Great White Sharks are also one of the most fascinating aquatic animals, offering much insight about the physical features, habitats, diets, and breeding patterns of sharks in general.

A Great White Shark’s lifespan is anywhere between 30 and 100 years, and a study narrowed this number down to approximately 70 years. Males reach sexual maturity at around 26 years while females reach it at about 33.

How Big Does A Great White Shark Get In Its Lifespan?

The Beginning Of A Great White Shark’s Lifespan

The great white shark species is ovoviviparous, meaning that eggs are fertilised and hatched internally. The hatchlings then remain in the mother’s oviduct, feeding off the remaining egg yolk until they are strong enough to survive in the ocean and live an independent life.

Another interesting fact about the great white’s young life is that as a pup, it displays a behavior known as oophagy, where the first few pups that hatch eat their unborn siblings within the womb.

Besides this, unfortunately, little else is known about this animal’s mating, gestation, or birth.

Great white sharks prey upon tuna, rays, whales, porpoises, dolpins, seals, sea lions, sea otters, sea turtles, sea otters and seabirds. In their adolescence, before they start to grow, they prey predominantly on fish because their jaws are too weak to deal the forces necessary to attack large prey.

When they reach a length of about 3 meters (9.8 ft) or more, their jaw cartilage mineralizes enough to withstand the impact of biting into larger prey species. They start to attack large marine animals once they reach the size of 4 meters (13 ft).

Where Do Great White Sharks Live?

The great white shark lives in offshore waters with temperatures between 12 and 24 degrees Celcius (54 to 75 degrees Fahrenheit). The highest concentrations of great whites are found in:

Yes, the great white shark is endangered. They are currently on the C.I.T.E.S. (Convention on International Trade in Endangered Species) Endangered Species list. And ironically enough, humans have played a huge role in their endangerment; we hunt great whites due to the fear that has been associated with this predator.

How Fast Can A Great White Shark Swim?

The great white shark has a white ventral (under) side and a gray dorsal (upper) side. This contrast gives the shark greater stealth, as each color corresponds to the point the shark is viewed from. If looking at the great white from above, its darker gray side helps it blend with the darker depths of the ocean. If looking at it from below, the lighter white side helps it blend in more with the lighter surface of the ocean. The great white also has a large snout, which needs to be particularly tough as it takes a considerable amount of impact during attacks.

How Do Great White Sharks Kill Their Prey?

It is no secret that the great white shark uses its teeth to kill its prey. When it seizes prey between its mighty saws, the shark shakes its head similar to a dog, tearing off chunks of meat which it then swallows whole. One bite of a great shark’s can tear off a 14 kilogram piece of flesh. This is usually why attacks on humans are fatal. The shark does not necessarily intend to kill the person — in fact, after one taste, it usually leaves the victim alone as it does not like the taste. However, so much damage can be inflicted through just one bite that the victim is left badly injured or killed.

The Great White Shark usually approaches prey from below and favors dirty water or bad lighting, as these two factors help further hide its attack. It most commonly attacks prey when they’re near the water’s surface, the exceptions to this being dolphins and porpoises. Why are the the exceptions? Well, dolphins and porpoises have an ability to ‘see’ everything in their immediate surroundings through an ability known as echolocation. If the shark was to attack them from below, it would risk being detected and losing out on its prey. For this reason, the Great White attacks dolphins and porpoises from above. This species of shark has also been observed spy-hopping, a practice where the shark lifts its head out of the water to catch a glimpse of potential prey and perhaps even smell it.

The Difference Between Males And Females

Great White Sharks dominate depending on size and sex. Females are larger than males and are therefore dominant. In general, they do not fight one another physically, but rather use rituals to ward off potential threats and competition. Despite the popularity of these rituals, though, if push comes to shove, biting is still a last resort action to assert authority.

The Great White Shark is set apart from other sharks by its technical warm-bloodedness. A web of veins and arteries are situated on each side of the shark’s body and work to warm the blood and conserve its heat. The internal temperature is kept relatively constant and above that of the water. This enables the shark to use its energy for hunting and swimming rather than for trying to warm the body up. Technically, this classifies the Great White as an endothermic poikilotherm (meaning that the internal body temperature is not regular, but is kept constant, irrespective of the temperature of the water).