Each shark species has its own expected life span and it is difficult to set an average for sharks as a whole. However, very broadly speaking, most sharks live for between 20 and 30 years. The Spiny Dogfish lives for over a century, and some Whale Sharks have been known to do the same.

Unlike most other animals, sharks generally do not care for their young. As soon as pups are born into the water, they swim away and care for themselves. Some sharks give birth to litters of up to 100 babies at a time, while others may have as few as two or three. The Great White Shark gives birth to approximately three to 14 pups at a time. In almost all cases, all of the pups are beable and well-developed. This is in stark contrast to many other animals (such as several fish species and some turtles), which give birth to large numbers of ill-developed young (in effect, producing quantity over quality). 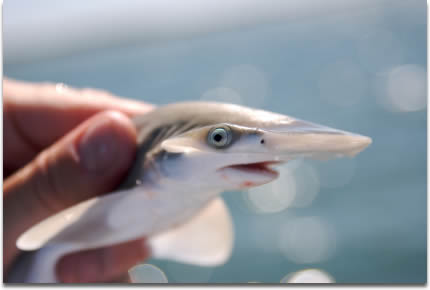 A baby bonnethead shark caught in the Gulf of Mexico.

This means that sharks are defined as K-selected reproducers.

Mating amongst sharks is somewhat elusive, rarely seen by researchers and scientists. Fertilisation of the female egg occurs internally. The male’s pelvic fin (the fin on the underside of the body, close to the tail) has evolved into claspers, a pair of organs that can best be compared to a penis in mammal species.

Sharks use one of three ways to carry their young : 1) Oviparity, 2) Viviparity and 3) Ovoviviparity.

Oviparity : Some sharks lay eggs, often protected within a leathery egg case.
Viviparity : This term is used to describe the sharks that have a placenta from which to feed and sustain their young inside. The young are born alive and at full term.
Ovoviviparity : The majority of sharks lay eggs inside their body. These hatch and the young remain inside for some time. Eventually, they are born alive and fully developed. Some shark species display a form of cannibalism in that the first pup to hatch eats the other eggs or pups while still inside its mother. This is called oophagy.

The gestation period for ovoviviparous species is not known for sure. However, it is thought to be anywhere from several months to over two years.