It remains a misconception that sharks are unintelligent, surviving purely off instinct and spending their lives in pursuit of a meal. Research that supported this idea was rudimentary and usually based on the small sharks to which scientists had access. With increased time, finances and resources available today, though, more is being discovered regarding the intellectual capacity of sharks.

The Great White Shark is an apt representative for the group as it is relatively large, and it is prolific in waters around the world. The average Great White is about five metres long. Its brain is Y-shaped and is approximately 60 centimetres long. While it is not particularly large or heavy, especially in comparison to the entire size and mass of the body, there is no concrete evidence that size has a direct correlation to ability when it comes to brains. What has been discovered is that shark species that are not required to hunt or to approach prey stealthily (such as certain bottom-feeders and those that suck in plankton for nourishment) have smaller, lighter brains than their hunting counterparts. 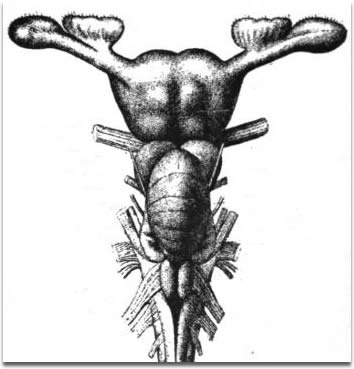 The Great White’s brain is very compact and is made up of millions and millions of nerve cells called neurons. The components of the brain are :unravelled:, and visible to the eye. This is in contrast to the brains of humans, which are rolled and folded into a rounded mass. The hind-brain, mid-brain and forebrain consist of various specialised regions. These regions appear as pearls, strung on a complex string. The brain is hollow in most places, perforated by irregular ventricles. These hollows are filled with cerebrospinal fluid, which assists in the chemical regulation of the brain.

The shark’s sense of smell is particularly acute, and almost two-thirds of the brain is dedicated to this sensory perception. The olfactory tracts have lamellae, which increase the surface area and make for an even more sensitive neural response. The olfactory messages will convey messages concerning the identification of potential prey, the recognition of certain environmental indicators (e.g. a drop in salinity as the shark nears a freshwater outlet), the identification of potential mates, and so on.

There is a very big difference between intelligence and instinct. Instinct is not learned or experienced;it is merely an automatic response that has been programmed into the animal since birth. Examples include the rolling back of the eyes when going into hunting mode. Intelligence is the shark’s ability to assess a situation and make a decision based on that assessment. This decision-making occurs in the cerebral hemisphere. The centre of the cerebrum is dedicated to home ranging and social behaviour.

Of course, the brain is responsible for the usual bodily functions as well. It receives and processes messages of hunger, exhaustion, electromagnetic pulses and so on. As research continues, there have also been reports of sharks demonstrating a degree of curiosity, which is quite an advanced impulse amongst animals that were believed to be intrinsically stupid. This proves that we have only scratched the surface of these fascinating animals and the qualities that make them so unique.