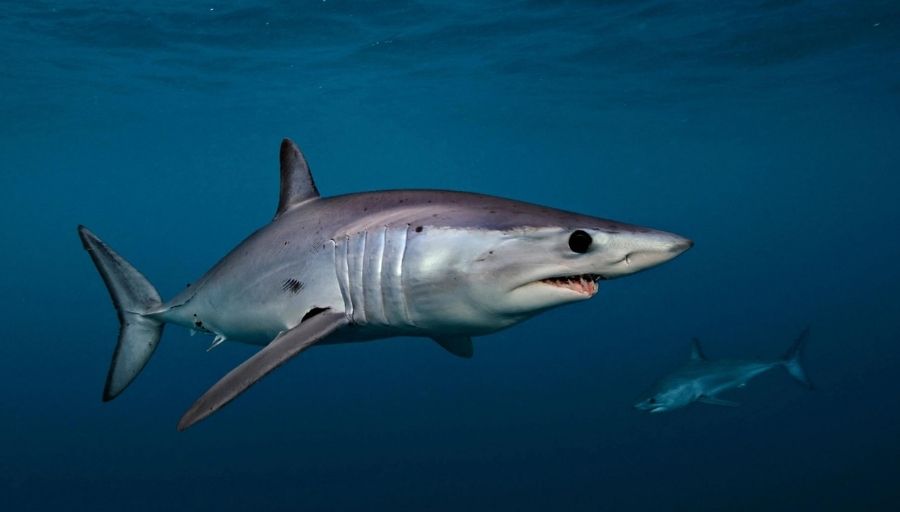 The Mako sharks also known as sharpening nose Mackerel sharks or blue pointers are one of the most dangerous species of sharks belonging to the family Lamnidae. The species are widely distributed in tropical and temperate waters. They have streamlined bodies with a pointed snout and crescent-shaped tails. The shark’s species ranges in color from grey to deep blue. The most giant Mako sharks ever recorded can grow to a maximum length of 14.8 feet or 4.5 meters and weigh up to 1,100 pounds or 500 kg. These sharks mostly feed on fishes and small crustaceans.

Both species are widely distributed in the warm waters of the tropical and temperate regions throughout the oceans and seas. The Shortfin sharks are spotted in the open waters of the Pacific Oceans and Southern California during the summer season. Moreover, during the spring and autumn seasons, they are also spotted in San Diego’s waters, New Zealand, Maine, Western Atlantic, Gulf of Mexico, Canada, and the Brown Bank of Nova Scotia.

The shortfin mako sharks are the fastest known species in a shark’s kingdom. These sharks can grow to a maximum length of 10 feet or 3.2 meters and weigh up to 132 to 298 pounds (60 to 135 kg).  These species have cylindrically shaped bodies with elongated tails. The color of sharks varies from grey to metallic blue from the upper side and is white underneath the belly. They have a sharply pointed snout, five gills slit, non-serrated teeth, and well-developed eyes. They are highly active and extremely fast sharks that can move with the speed of 50 kph or 31 mph and can cover a distance of 58 km or 36 miles in a day.

The long-fin mako sharks have a slender body, big eyes in front of the head, and conical-shaped snout. The teeth are long and pointed, the gills slit are located at the top of the head. The sharks are dark blue to blackish blue from the top and grayish blue from the underside of the belly. The long fin sharks can grow to a maximum length of 8.2 feet or 2.2 meters and weigh up to 150 pounds or 70 kg. However, these sharks are larger than the Shortfin mako sharks that’s why they are less active than the short fins sharks.

What main feature distinguishes the two species of Mako sharks?

Yes! You are right.

The Fins – The Pectoral Fins

The most prominent feature which distinguishes the shortfin mako from the long-fin mako sharks is the length of their fins. The pectoral fins of Longfin sharks are longer and have pointed ends, the fins are even longer than their head whereas the pectoral fins of short fins sharks are small and blunt-shaped.

What Do Mako Sharks Eat?

How Do Mako Sharks Reproduce?

Both shortfin and longfin mako sharks follow the same method of reproduction. The mating results in the internal fertilization of the eggs. Almost all the species are ovoviviparous – the development of the embryo takes place inside the mother’s uterus, and the fetus absorbs nutrients from the egg yolk. After the gestation period of 18 months, the sharks give birth to young pups. The Mako species give birth to about 8 to 10 pups which are set free to live independently. The maturity level varies among male and female sharks, females reach sexual maturity at the age of 18 years, and males reach the maturity stage at the age of 8 years.

Are Mako Sharks in Danger?

Yes! Human activities such as overfishing unintentionally bycatch and finning are the two major factors that may lead to the extinction of Mako sharks. According to (IUCN), both Shortfin and Longfin sharks are listed as vulnerable species.

The Mako sharks belong to a group of Mackerel sharks that are widely distributed in the open waters of tropical and temperate regions. The Mako sharks are further categorized into 2 species – the short-fin and long-fin mako sharks which differ from each other based on the length of their dorsal fins. The Mako sharks can reach a maximum length of 14.8 feet or 4.5 meters and weigh up to 1,100 pounds or 500 kg.

The members of the Mako family follow the same diet and reproduce by the same mode of reproduction. Although the species are not endangered but are listed as vulnerable species by the International Union for Conservation of Nature and Natural Resources.