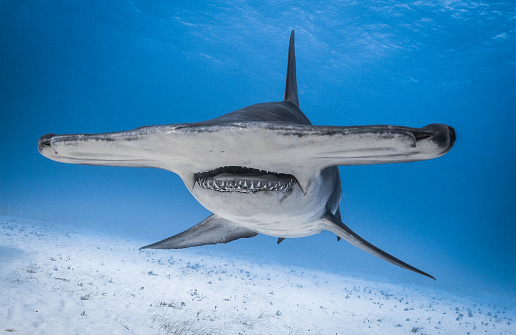 With abundant wildlife, peacock blue water, white-sand Beaches, arcades, and so much more, Panama City Beach is truly a breathtaking place and a destination for all. Waterfront town in Florida, Oh! Wait a minute; there is one more thing that comes into our minds when we hear the name Florida, the fact that for decades, Florida has surpassed global charts in the number of shark attacks.

Thankfully, things are now under control, and we have seen a rapid decline in shark attacks over the course of the past few years. Now Florida, and particularly Panama City Beach, is known for the presence of the most unique and identifiable species of sharks, the Hammerhead sharks.

Take a moment to learn about these amazing sharks prior to going there to see them yourself and have a chance to interact with them safely.

All you need to know about hammerhead sharks

Distinguished by their unusual and distinctive heads, which are flattened and laterally extended into hammers, hammerhead sharks inhabit warm waters around the world. It is due to their unique physiology they are easily recognized by all. During the daytime hammerhead shark usually swims in schools, but at night becomes a solitary hunter.

Bonnethead sharks, sometimes known as shovel heads or bonnet sharks, are abundant in the Gulf of Mexico and are the only species of shark that are classified as omnivores. In general, bonnethead sharks are between 2.6 and 3.0 feet long, getting up to 4.9 feet in length at maximum. They feed mostly on mollusks and small fishes.

This species of the hammerhead shark is a rare and poorly known one in the family Sphyrnidae and is also the smallest with a size of around 35 inches. Its other names are crown shark and mallet head shark.

The kinky-headed species is widely distributed along coastal regions and grows to a size of about 10-13 feet. When young, they tend to be found closer to the surface, while adults are found much deeper in the ocean. Usually, they do not attack people and are not considered dangerous.

These hammerheads prefer temperate waters and are found worldwide at medium latitudes. As a predator, smooth hammers can measure up to 16 feet in length, eating a variety of fish, invertebrates, and large sharks and rays. Although human interactions with this shark are rare, it is potentially dangerous.

The largest species in the family of this kind, it measures about 20 feet in length at maximum. Great hammerheads, as apex predators, feed on a variety of prey, such as crustaceans and other shark species. Great hammerhead sharks are frightening, but they rarely attack humans, and they sometimes behave inquisitively towards divers.

From bonnethead shark to great hammerhead to scalloped hammerhead, Panama City Beach abode different kinds of hammerhead species. Not only this, but it also holds many other shark types that include and are not limited to:

There is no doubt that the existence of hammerhead sharks in Panama City Beach is a source of excitement for many people, but others are concerned about their safety, as swimming alongside sharks isn’t as easy as it seems. Considering the large size of the hammerhead and the presence of other shark species, as listed above, it raises a question about its safety.

Attacks by sharks are extremely rare even though sharks abound in the area. So, if it is the sharks, there is no concern, and Panama City Beach is absolutely safe. A strong current or high surf usually makes it hard to swim in the area; otherwise, it’s fun to be there.

In Panama City Beach, several species of sharks can be seen, including hammerhead sharks. There are very few shark attacks in that area, however, and people visiting there should make sure they are aware of the potential dangers of the sea conditions rather than the possibility of being attacked by a shark.