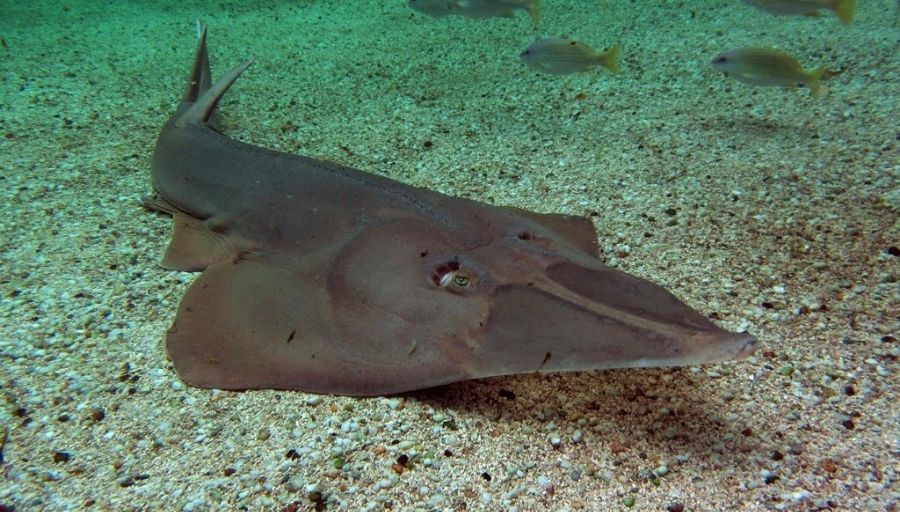 Isn’t it interesting that a shark is named after a guitar or shovel? Rhinobatos productus belongs to the Rhinobatidae family which comprises only 47 to 50 species that are distributed worldwide. They are named Shovel Nose sharks because of their long and pointed sharp snouts which exactly look like a shovel. They are also named Guitarfish because the shape of their body resembles the guitar. However, they may confuse people because their physical appearance looks like sharks as well as rays.

Analyze the article to know more about these exceptional creatures of the ocean.

What Is The Geographical Distribution Of Shovel Nose Sharks?

What Is The Physical Appearance Of Shovel Nose Sharks?

The Guitarfish have a flattened body that looks like a guitar, and a long pointed snout that resembles a shovel. They are sandy brown to olive in color from the upper side and are whitish from underneath. The sandy color of the species helps them to blend with the ocean floor habitat. They have broad pectoral fins, rounded caudal fins without lower lobes, and two dorsal fins which are located near the tail.

The sharks possess small and round shape teeth which range in number from 102 to 112. Furthermore, the male sharks are smaller than the female sharks – the mature males can grow to a maximum length of 47 inches or 120 cm and the adult female sharks can reach 54 inches or 137 cm in length and weigh 14.63 pounds or 6.64 kg.

What Do Shovel Sharks Feeds On?

The species adapts a unique strategy – during the daytime, they bury themselves in the sand and at night hours they leave the sand to hunt the prey. The shark species are bottom dwellers and feed on a variety of food items including small invertebrates, shrimps, crabs, bony fishes, crustaceans, aquatic and marine worms, mollusks, clams, and stomatopods.

How Do Shovel Sharks Reproduce?

The species breeds once a year probably during the summer season in June. The sharks reproduce by oviparous mode of reproduction – internal fertilization leads to the external development of the young ones. The mother lays eggs in the external environment and the embryo obtains nourishment from the yolk.

After the gestation period of 9 to 12 months, the eggs hatch, and the young pups are born. The female shark on average gives birth to 6 to 28 offspring. The female reaches the maturity level at the age of 7 whereas the males reach sexual maturity in 8 years. The average life expectancy of Shovel sharks is 11 to 16 years.

The Shovel Nose sharks also known as Guitar sharks are widely distributed over the globe. The sharks are called unique names because they have guitars like flattened bodies and shovel-like pointed snouts. However, the appearance of sharks resembles those of rays and skates. As they are bottom dwellers, they include many foodstuffs in their menu cards. The species are oviparous and give birth to 6 to 28 offspring with an average life span of 11 to 16 years.