Many locations around the world have implemented shark nets in response to shark attacks or frequent shark sightings, particularly in areas that surfers and swimmers are most prevalent. The purpose of these nets is to protect swimmers and surfers from dangerous and aggressive species (such as the Great White Shark and Bull Shark). These nets are submerged below the water’s surface, about 200 metres from the shore.

The meshing is large, designed to catch the sharks and trap them until they struggle to their death, eventually drowning under the weight of their own body.

Most meshing is about 50 centimetres wide, which allows small fish through, but entangles large fish species and sharks. If the meshing was much smaller, sharks would possibly be able to bounce off the net and continue to live unaffected by the boundary. However, these would be costly as the

movement of the water would cause them to rip, creating a need for regular replacing. The larger holes allow currents and waves to pass through the nets with little damage. Nets are suspended so that there are a few metres above them as well as on either side of them, technically allowing animals to swim over and around them.

The target catch of these nets is dangerous sharks that present a threat to human beings in the waters of that specific area. However, the target catch and the actual catch are very different.

Nets do not discriminate between common and endangered species, and this presents with a particularly dangerous scenario.

Drum lines have been suggested as more appropriate alternatives. These involve baiting hooks and suspending these on long lines in the water, presuming that only large (and, therefore, dangerous)

sharks will be attracted to these. However, this still involves the killing of these sharks and it is not completely restricted to dangerous shark species. 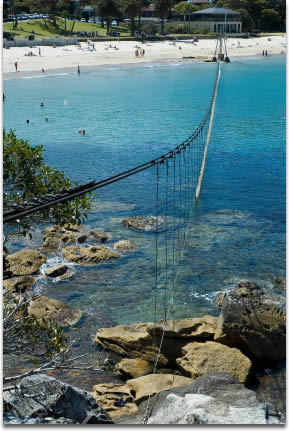 Beach in Mosman, Sydney, secured by a shark safety net.

At present, New South Whales in Australia alone boasts 51 beaches with shark nets and Hong Kong has a compliment of 32 netted beaches.

The theory behind these shark nets are that the fewer sharks there are alive in areas where bathers can be found, the fewer attacks there can be. However, the negative implications of these – the most important of which is arguably the death of many other and endangered species – may be thought to outweigh the relative safety that is intended by these nets. In addition, the full implications of indiscriminately killing many different species of sharks and other marine life have not been delved into adequately in terms of the relationship between predator and prey, population numbers and marine biodiversity.