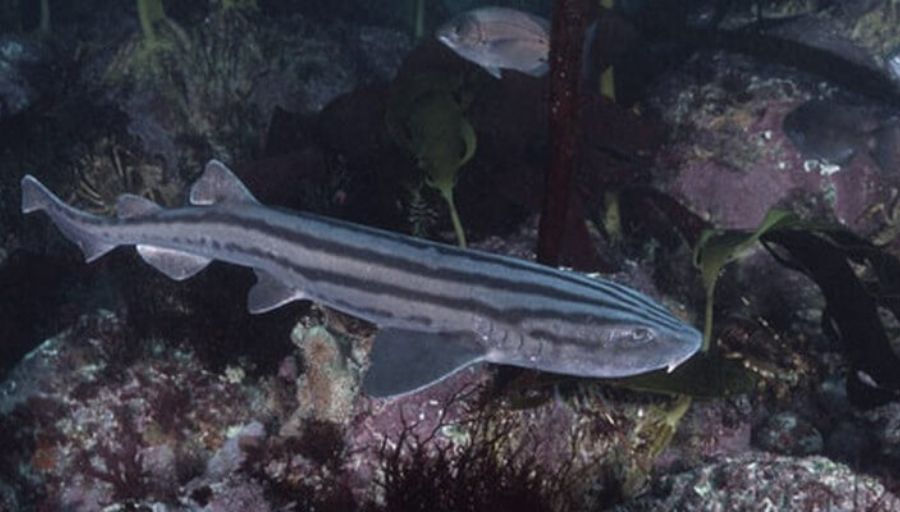 Poroderma africanum is commonly known as The Pyjama sharks or Stripped cat sharks. The sharks are named so because they have long stripped patterns on their skin running parallel to each side which look like they are wearing Pyjamas. How funny! Sharks are not very popular in oceanic water but came into the limelight after being captivated and gaining people’s attention because of their unique striped pattern. Let’s study more the living habitat of Pyjama sharks? Scroll down.

What Is The Geographical Distribution Of Pyjama Sharks?

The Pyjama sharks are found living in the coastal saltwater of the temperate zone of South Africa – most frequently spotted on the rocky bottoms, continental shelf, Kelp beds, and caves at the depth of 160 to 330 feet or 50 to 100 meters. The species are also endemic to the South-East Atlantic Ocean, and Western Indian Oceans. Some species are also reported in the open waters of Zaire, Mauritius, and Madagascar.

What Is The Appearance Of Pyjama Sharks?

The sharks are greyish ash in colour with seven broad stripes running along the dorsal as well as the lateral sides of the body. They have short barbels located near the nostrils which do not reach the mouth. They have 2 dorsal fins, caudal and rounded pectoral fins which help them in swimming at high speed. The skin of sharks is covered with small-scale appendages called dermal denticles which are highly calcified and protect them from injuries and predators. The sharks have 18 to 25 teeth embedded in the upper jaws and 14 to 24 teeth in the lower jaws. The upper teeth are visible even when the Pyjama sharks close their mouth.

What Is The Size Of Pyjama Sharks?

What Do Pyjama Sharks Eat?

The sharks are bottom dwellers and nocturnal that hunt prey in night hours but are also opportunistic feeders and hunt in the daytime if the prey is available. Like other sharks, the Pyjama shark feeds on crustaceans, small bony fishes, cephalopods, polychaete worms, shelled molluscs, hagfish, small sharks, invertebrates, octopuses cuttlefish, and squids.

How Pyjama Sharks Do Reproduces?

The shark’s species are oviparous which means that after internal fertilization, the female sharks lay eggs in the external environment. The developing embryo is coated with leathery eggshells which provides protection from harsh environmental conditions as well as from predatory animals. After the incubation period of 5 to 6 months, the eggs hatch, and the baby pups land in the new world. The female sharks reproduce twice a year and give birth to only 2 pups each time.

Do Pyjama Sharks Face Any Threats?

Overfishing is a major threat that Pyjama sharks had to face. Although the species are not very common among the fisheries but are bycatch by recreational and commercial fisheries. Finning practice leads to the death of sharks due to suffocation. Furthermore, these sharks are reported as Least Concern by IUCN which is why no conservational programs are designed for the protection of these species.

Pyjama sharks are also known as stripped sharks because of the unique longitudinal pattern of stripes running parallel on both the dorsal and lateral sides of their body. Although the species are widely distributed in open waters, they are not very commonly seen because they are bottom dwellers and are rarely spotted near the shoreline. However, in the artificial environment, the shark gains people’s attraction because of their unique pattern of strips which look like Pyjama. If you visit the aquarium, then by knowing about their unique appearance you will spot Pyjama sharks at once.