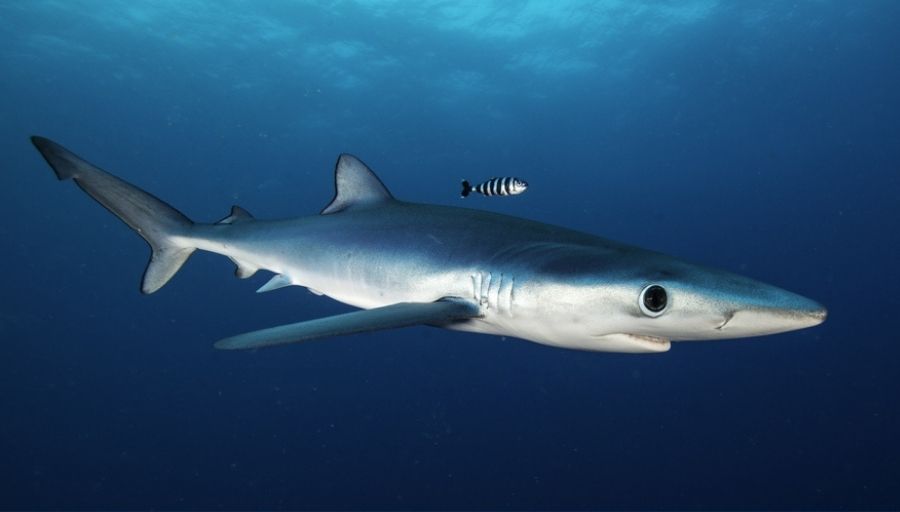 Prionace glauca also known as Blue sharks belong to the family Carcharhinidae – which includes Requiem sharks. Blue sharks are the most widely distributed species of sharks that live in the cold temperate as well as the tropical water zones. The sharks spend most of their time deep in the ocean and are rarely spotted near the shoreline. They are named Blue sharks because of their deep blue skin color which gives them a unique appearance among all the other sharks.

If you are eager to know more about these blue fairies of the oceanic world. Scroll down and study them in detail.

What Is The Appearance Of Blue Sharks?

As the name indicates, the upper body of the shark is blue and white from the underside. The unique color scheme helps the sharks to camouflage with the water environment and protect them from other predatory animals. Blue sharks have a torpedo-shaped elongated body about 5.6 to 7.2 feet or 1.7 to 2.2 meters in length and weigh 454 pounds or 206 kg. They have a large pointed snout, large circular eyes, saw-like sharp teeth, and long pectoral fins located on both sides of the body. The skin is full of small denticles known as dermal denticles which makes their skin smooth but strong. They have 5 pairs of gills slits which help them in breathing.

Blue sharks are known as a highly migratory species of sharks that travel from one locality to the other, seasonally. During the summer season, the shark migrates toward the North Pole where the water warms and the food is available in excess quantity. When the winter arrives, the sharks return to their original habitat. On average, sharks travel about 6,000 miles every year. The large pectoral fins help them to travel long distances. Moreover, sharks do not waste much energy while traveling because they are ectothermic (regulate their body temperature according to the surrounding environment).

What Diet Plan Is Followed By Blue Sharks?

The Blue sharks are carnivorous species that feed on a diversified variety of foodstuff including:

What Behaviour Do Blue Sharks Exhibit?

Moreover, these sharks are highly migratory when they had to feed or mate. They are nomadic species exhibiting a clockwise migration pattern – starting from Gulf Stream to the Caribbean, ending in Southern Africa, and then returning to their native habitat.

The Blue sharks gain people’s attention because of their unique blue color scheme. These species are known to be highly migratory species that can travel long distances without wasting much energy. They are not choosy about food so they feed on almost everything which comes in their vicinity.