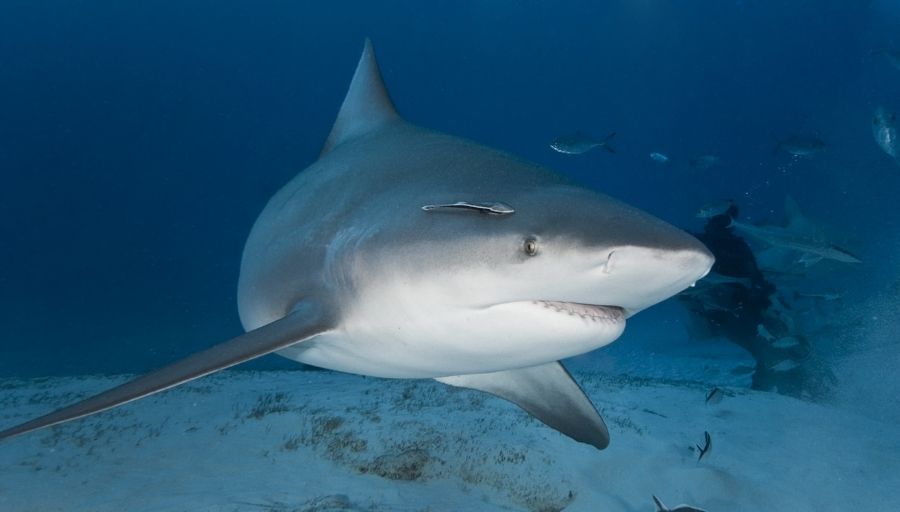 The Bull sharks also known as Zambezi shark belongs to a group of Requiem sharks. Scientifically, they are named Carcharhinus leucas and belong to the family Carcharhinidae. They inhabit shallow water of the tropical shoreline where food is available abundantly. Potentially, the Bull sharks are one of the most aggressive and dangerous species of sharks and are responsible for most shark attacks on humans because they tend to hunt in highly crowded areas – near the shoreline, where people often swim. In this article, we will analyze the survival pattern of this fearsome creature of the ocean. If you are fascinated then scroll down quickly.

What Is The Appearance Of Bull Sharks?

The Bull sharks have grey color upper bodies and white-colored bellies. The sharks have stout bodies with short blunt noses and teeth that are triangular but are serrated and sharp like razors. They have large and angular pectoral fins, the first dorsal fins are larger than the second one. The adult sharks have a black spot on the top of their fins which helps to identify the Bull sharks.

Furthermore, the sharks can have a maximum length of 7 to 13 feet and are approximately 200 to 500 pounds in weight. Interestingly, the female sharks are larger than the male sharks – females are 3.3 meters whereas the males are 2.1 meters in length.

What Kind Of Behaviour Do Bull Sharks Exhibit?

Usually, Bull sharks solitarily hunt the prey but occasionally also hunt the prey in groups. When they are in the mood of hunting, they swim with a high burst of speed through the flowing water with extreme aggression to attack and grab the prey – either it could be animal or human. Thus fast and agile predators are famous for their unpredictable behavior.

What Do Bull Sharks Includes In their Diet Chart?

Bull sharks being the apex predator feeds on almost everything they see such as:

Luckily, humans are not a part of their menu card.

How Do Bull Sharks Reproduce?

Bull sharks are viviparous marine animals that give birth to young ones in the water of river mouths. During the late summer and early autumn, after the completion of the incubation period of 12 months, the sharks give birth to 2 to 13 pups. Bull sharks become sexually mature at the age of 8 to 10 years and live for 20 to 30 years.

The member of the Requiem family, Bull sharks live in the coastal water of the world.  Bull sharks have gained people’s attraction because of their extreme aggressiveness. The shark is mostly spotted in the area where people swim which is why about half of the shark attacks recorded are caused by Bull sharks. They have a grey color stout body that is 13 feet long and 200 to 500 pounds in weight. The species are solitary hunters and feed on almost everything which comes in their vicinity – even garbage. Moreover, the viviparous species can live for about 20 to 30 years. That’s all about the most aggressive species of shark – The Bull Sharks.