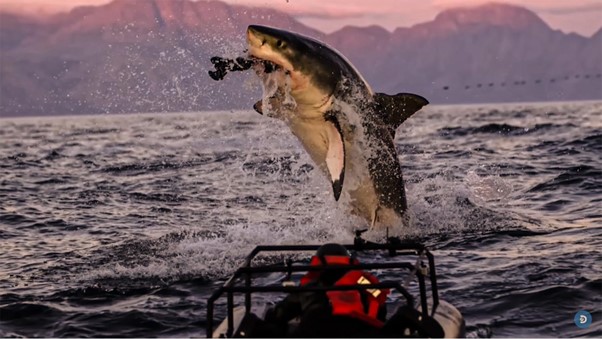 Africa’s flying sharks? Sounds interesting right? The image surrounding sharks is not so friendly, thus it is hard to believe something fun is associated with sharks. Though It is rare to see sharks jumping out of the water, seeing them flying is surely going to be a whole lot more dramatic. Well, it’s not the view you can get in any ocean, but Africa’s flying sharks are the ones famous for that. Want to know more about them? Here’s your read.

What Are Africa’s Flying Sharks?

Great white sharks are also known as Africa’s flying sharks as a large number of them can be found leaping in False Bay, a water body in South Africa. This area is known for its extraordinary seal colony, a favorite meal of the Great White Sharks. As seals contain a substantial amount of body fat, they provide sharks with an additional source of energy.

Why Do Great White Sharks Fly High In The Air?

Given the hunting and leaping capabilities of the great whites, they fly high in the air on the African island’s coast to hunt their prey. As a great white shark has a very dark upper body, it blends in well with the sea’s black depths, allowing it to surprise its prey from below.

Deep down, the Great White picks up enormous speed as soon as it spots a seal near the surface of the water. In order to reduce turbulence, the cigar-shaped and dermal denticles on the skin help it thrust like a shooter. In an attempt to grab its prey, the shark opens its toothed jaws and clamps down on the seal with immense force.

A shark’s bite can cause a seal to be thudded high into the air if it misjudges its bite, which can often result in the seal being incapacitated permanently. This pursuit of prey by the largest predatory shark is surely an awestruck experience that visitors or researchers can never see.

Do Great White Sharks Leap Out Of The Water Only To Hunt?

It is interesting to note that, at times, you will see sharks leaping out of the water even if no prey is present. It may be out of joy or anything else; the reasons are unknown. It is quite apparent, however, a particular population of Great White Sharks has acquired this behavior from one another, indicating a high level of intelligence.

Are There Any Other Shark Species Showing Leaping Behavior?

Why Not Also Check Out How High Can A Great White Shark Jump?

With that said, shark aerial attacks are becoming rarer, and associates in South Africa’s shark tourism business think they are onto something. Long-line fisheries targeting smaller shark species, which great whites prefer to prey on, are believed to be the cause. It may also be due to changing ocean conditions that great white sharks are resorting to new hunting grounds.