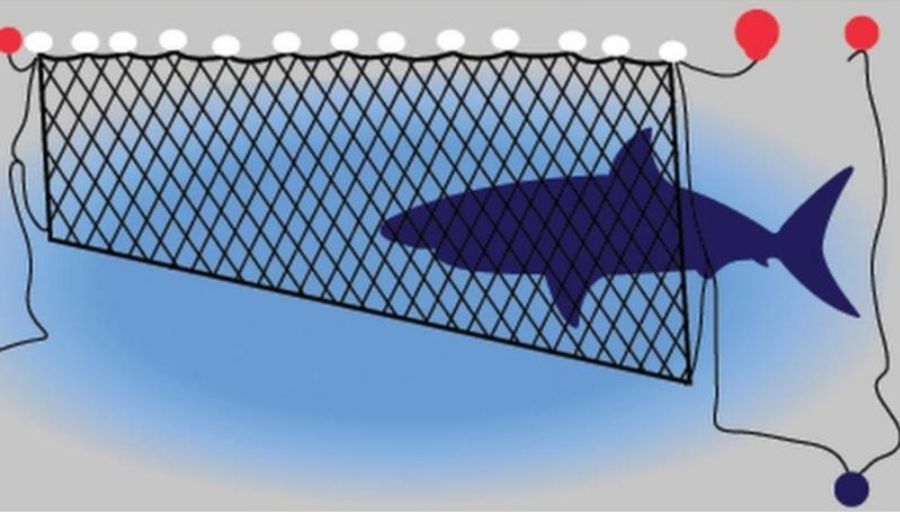 Basically, these nets are used to “protect” swimmers from shark attacks, but as mentioned above, shark attacks are extremely rare. So, the shark nets used are often very harmful to other species in the waters. Water usually covers these nets under the surface. The optimum area for putting the shark nets in the water is usually about 200 meters from the shore. Let’s learn more about shark nets and their alternatives.

What are shark nets?

Shark nets are basically just nets designed to trap or restrict sharks from a specific area. It is actually just for restraining them, but because sharks cannot free themselves when it traps them, it ultimately leads to their death. When sharks are trapped without any hope of freeing themselves from the shark net, they ultimately drown under the weight of their own body and die. While this protects humans from shark attacks, it is definitely very harmful to sharks and other large sea creatures.

Shark nets measure up to fifty centimeters wide. This allows small fish and sea animals to get through the net, but larger animals and fish, such as the Great White Shark and the Bull Shark, get trapped in it. In addition to sharks, other larger animals are also trapped in the shark net. These fish then get entangled to death. Shark nets, because of this reason, are often seen as harmful to marine biodiversity at large.

Other water creatures that are similar in size to sharks are badly affected by these shark nets. These animals include puffins, whales, non-threatening sharks, turtles, seals, porpoises, dolphins, and many other important marine lives. Shark nets entrap these creatures, which poses a threat to the diverse food chain of the ocean. This, in conclusion, maybe the cause of a huge interruption in the normal functioning of marine life.

Why are shark nets not effective?

It isn’t that shark nets are never effective. They can be when the biodiversity of marine life is kept in mind. Currently, the shark nets that are used to trap sharks have a large-sized mesh. Smaller fish can easily pass through shark nets, but when the creatures mentioned above come in contact with a shark net, they are trapped to their death. There is a way to improve this, and it would involve changing the size of the mesh used in the shark nets.

If the mesh size is reduced to a very small size, sharks can easily bounce back from the shark net. This would serve the purpose of not allowing sharks to come to a specific area. This will not even pose a threat to smaller fish since the mesh is still small enough for the smaller fish to pass through. However, this would be difficult to maintain. Smaller mesh would rip from the water pressure after every little while, so it would need regular replacing. Still, it would be a better option as it does not endanger the creatures as much.

What are the alternatives for shark nets?

As mentioned above, shark nets having a smaller mesh would be difficult to maintain. Moreover, it would be a lot more expensive. So, it is possibly not the best model for replacing the current shark nets. There is, however, a number of other options that we can use in place of shark nets to reduce the cruelty to marine animals.

One of these alternatives is the SMART drumline. Without killing sharks, the SMART drumline keeps them away from beaches. It uses a non-lethal method to ensure that divers and swimmers are safe from shark attacks.

A SMART drumline is basically anchored to the sea floor and comprises two buoys. These buoys are also accompanied by a satellite-linked GPS communication system that is attached to a baited hook. The GPS system informs whenever a shark tries to eat the bait hook. These sharks are captured and then released about one kilometer away from the coastline. It has been seen that sharks rarely come to the area they were captured from.

Another method of protecting swimmers and divers from sharks is the Shark Shield Technology. The shark shield technology is capable of creating a highly powerful three-dimensional electrical field. This electric field is safe but causes unbearable spasms in the short-range electrical receptors of most sharks. This makes sure that the sharks move away when they experience such a strong but safe electrical field.

With the advancement in technology, it is about time that we call for better alternatives to shark nets. There is no need for the huge environmental fact to prove that shark nets are not required anymore when we have on marine biodiversity when we have other repellant methods available to lure sharks away from humans. Our article discussed the negative effects of shark nets, as well as what we can do to prevent these effects from occurring and how we can use alternatives to shark nets.