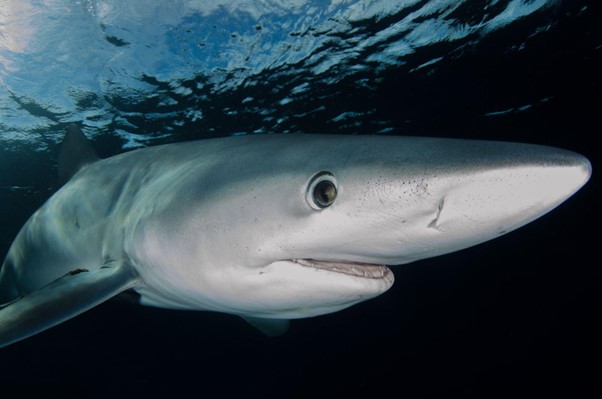 Can you feel the attractive shark eyes on you while swimming? Well, that might intrigue your interest in knowing their eye color.

Sharks have successfully ruled the oceanic world for millions of years because they have well-developed sensory systems, especially their sparkling eyes. Looking into the eyes of sharks is a splendid experience because sharks have beautiful eyes. So, what makes sharks’ eyes look so appealing? Definitely the color. The attractive eyes of sharks make people curious to know the color of their eyes which gives them a next-level charm. Read to know more about the colors of the sharks’ eyes which make them look appealing yet mysterious.

What Color Are the Shark’s Eyes?

Sharks – one of the most fascinating creatures of the ocean have blue-colored eyes. However, it has also been claimed that some sharks may also have black color eyes. Confusing, right? But let us break this myth for you. According to the studies, the iris of shark’s eyes is of a very dark blue color rather than black. It might give a black shade but actually, the eyes of sharks are blue in color.

Do Sharks Have Black-Colored Eyes?

No! They do not have black-colored eyes, they might look like the black color but actually, the color of shark eyes is dark blue. Moreover, the shark’s eyes are covered with a layer of tapetum lucidum which reflects the light through the retina and gives a black shade in the dark to the iris of the shark eyes.

Do Sharks Have White Eyes?

No! Sharks do not have white eyes! Sharks are blessed with an exceptional capability of rolling their eyes back. When sharks encounter the prey or have a big fight with other predatory animals, they try to protect their eyes by rolling them back. Once they roll their eyes, the socket turns all white. Look like ghost eyes.

Can Sharks See Well with Their Colored Eyes?

Yes. They can. According to studies, sharks have well-developed visionary senses and are capable of seeing objects in the dark as well. Sharks’ eyes are equipped with rods and cones, rods allow them to see in the dark whereas cones help them to see colors. Along with rods and cones, the lens, pupils, cornea, iris, and retina works effectively to provide sharks with a well visionary sense.

Yes! Sharks can see colors with their beautiful blue eyes. They are more likely to get attracted to bright and contrasting colors like orange, yellow, silver, and white but they can also see dull and dusky colors such as black, brown, or blue but do not get attracted to them.

What Does It Conclude?

Sharks have sparkling and shining eyes give them an attractive appearance especially the color of their eyes – deep blue color. The iris of the shark’s eyes is of blue color rather than black, it might give a shade of black in dark. That’s all about the color of sharks’ eyes – if you want to analyze sharks’ eyes then why don’t you be their Ophthalmologist?