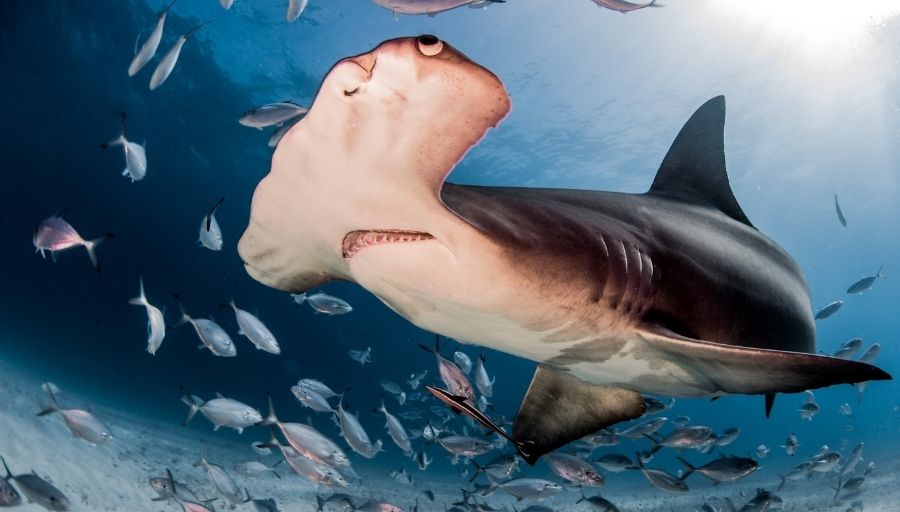 The Wing-head shark – scientifically known as Eusphyra blochii belongs to a group of Hammerhead sharks of the family Sphyrnidae and is the only member of its genus. The sharks are named so because of their unique cephalofoil head which looks like a hammer and is wider than half of the length of the body. Due to the exceptional shape of the head, the species are highly distinctive and are spotted commonly in almost all the oceans of the world. This article is all about Winghead sharks, so keep reading.

What Is The Geographical Distribution Of Wing-Head Sharks?

What Is The Physical Appearance Of Wing-Head Sharks?

The Winghead sharks are greyish brown from the upper side of the body while the lower side of the belly is of off-white color. They have wing-shaped large heads which are probably equal to half of the length of their body. There is a wide spacing between the circular eyes which provides them a binocular vision when they are in a position to hunt the prey. They have small arched-shaped teeth of which 15-16 teeth are arranged symmetrically in the upper jaw while the lower jaw contains only 14 teeth. The dermal denticles on the skin and five pairs of long gills slits help the sharks to swim with agility and high speed. The average length of a Wing-head shark is 73 inches or 186 cm.

What Do Wing-Head Sharks Eat?

Like other fishes, the Wing-head shark feeds on the following food items:

What Mode Of Reproduction Do Wing-Head Sharks Adopt?

What Is The Conservational Status Of The Wing-Head Sharks?

According to the Red list of IUCN, the Wing-head sharks are evaluated as endangered species as well as Least Concern species. The extreme fishing of sharks in India, the Gulf of Thailand, and Indonesia for meat, oil, and fins result in the decreasing population of sharks. To protect the remarkable species from being extinct, fishing and finning should be banned.

Eusphyra blochii also named Wing-head sharks belongs to the family of Hammerhead sharks. The sharks are named so because they have a large elongated hammerhead which is equal to half of the length of their body. The species are greyish brown colored and can reach up to 186 cm in length. The viviparous species give birth to 6 to 25 offspring in every breeding season. Miserably, the species are listed as endangered by IUCN because of overexploitation by humans.