If sharks were not terrifying enough for the average swimmer, diver and surfer, flying sharks are sure to evoke a new sense of dread. False Bay in Cape Town is home to the only group of Great White Sharks in the world that perform these leaping feats on a regular basis. However, these sizeable sharks are not becoming airborne as an evolutionary adaptation to retrieve birds in the air or to spot hapless swimmers near the shore. Rather, they are breaching, much the same way that whales do, as part of their hunting behaviour.

False Bay is home to Seal Island. As its name implies, this area is the local habitat of an extraordinary colony of seals, one of the Great White’s favourite meals. This prey has a high body fat content, ideal in terms of providing the sharks with added energy. Sharks frequently make a surprise attack on its prey from below. This is aided by the fact that its upper body is very dark, blending in well with the black depths of the ocean. In addition, few animals look down when swimming. 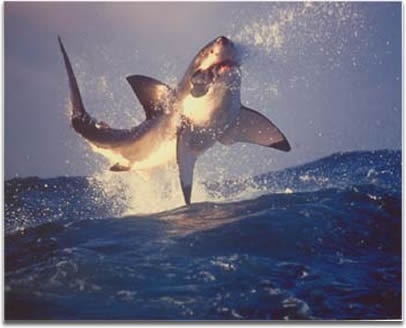 Upon spotting a seal near the surface of the water (as it makes its way across deep ocean waters en route to or from the island), the Great White picks up a massive amount of speed from deep down. It thrusts its body like a torpedo, being aided by the fusiform shape and the dermal denticles on the skin, which both reduce turbulence. As it approaches the prey, it opens its sawed jaws and clamps down on the seal with enormous force as they both come flying out of the ocean. If the shark misjudges its bite, it gives the seal a mighty thumping high into the air, which can often injure the animal enough to immobilise it completely. Many seals, however, rely on the adrenalin that follows and make a life-and-death effort to escape. Tourists and researchers that have had the opportunity of watching the pursuit between this mighty predator and its scurrying prey are sure to be awe-struck by nature’s ingenious design.

Interestingly, this breaching behaviour has caught on amongst the False Bay Great White Sharks, and they have been witnessed leaping out of the water even in the presence of no prey. Their motivation remains unknown, but it is believed to be a form of playfulness. Indeed, the very fact that this particular population of Great Whites Sharks have learned this behaviour from one another indicates a level of intelligence not previously thought to belong to sharks.

There are official tours that are conducted to reveal these flying sharks to visitors from all over the world. The boat tows a seal-shaped decoy, encouraging these hunters to display their strength and power as they try to seize the “prey”. It is vital that the encounter between the shark and the seal is viewed from a fair distance so as to make as little impact on either of the animals as possible. Mankind has left a damaging imprint on much of its natural resources and those effects need to be minimised.