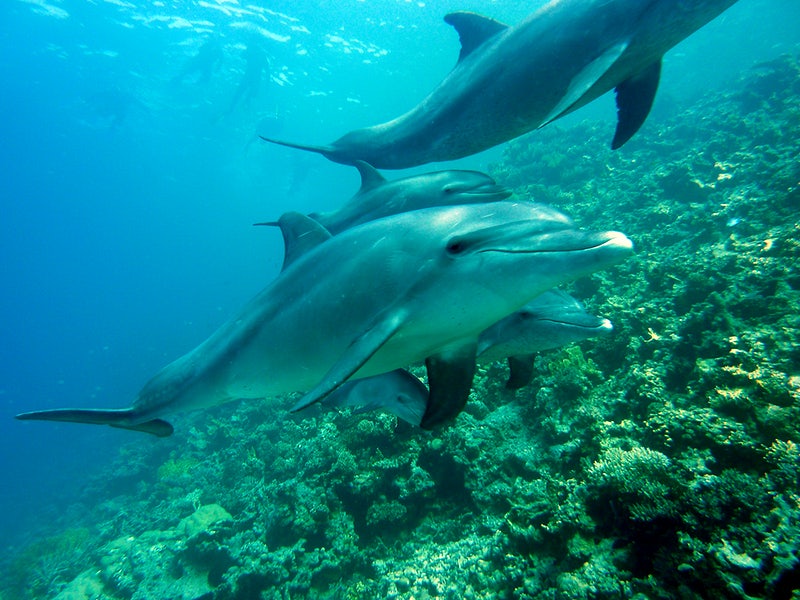 When it comes to ocean creatures, the two most mysterious and enigmatic animals that instantly hit the mind are sharks and dolphins! Sharks and dolphins are two different marine and freshwater giant animals which share the sea and ocean together. There seems to be an endless competition among them because a number of differences have been documented till date, but this is always a hot topic of debate among researchers whether sharks or dolphins are related or not. To solve this confusion, let’s take a look and study in detail to find out whether they are relatable or not?

Are Sharks and Dolphins relatable?

Yes , to some extent. Although, both are very distinct species because sharks belong to cartilaginous fishes and are cold blooded and dolphins belong to marine mammals and are warm blooded animals. But despite these differences, sharks and dolphins share some features which depict that they are quite relatable.

How are sharks and dolphins related?

Though both creatures seem different when closely observed, they look quite similar as both have highly streamlined bodies with fins and tails. Evolutionary changes occur repeatedly by the time which makes both the species look alike. Similarly, the same physical adaptations among associated ancestries like fishes and mammals happen so frequently that they look cursorily similar in their external appearance.

As both are exposed to the same environmental conditions, fishes and mammals have evolved their body shape over the time, have the same streamlined body, this body shape helps them to move through dense water medium with the high speed. Moreover the traits responsible for the smooth outline of their body were supported by natural selection and passed on to each evolving group, thus sharks and dolphins look similar because natural selection is responsible for specific body shape to move through the water tides efficiently.

2: Their habitats are quite alike

The first and the foremost fact which represents the similarity among them is the habitat. Sharks and dolphins share a common habitat as they both live in seas and oceans, both enjoy their rides in deep and shallow water, and prefer to thrive in natural habitat. This means that they share the same water territory. Thus, living together in the same habitat is one of the pieces of evidence which illustrate that they are relatable.

3: They even feed on similar kind of food

As sharks and dolphins share the same habitat, they also have adapted the same feeding mechanism, as both have the ability to capture their prey. Sharks and dolphins feed on almost the same kind of prey like small fishes, planktons, crustaceans and squids. Even when there are a number of fishes present in their vicinity, they communicate with each other and hunt them together. They are not solitary killers as many people think so when they hunt together, they are able to handle the bigger prey as well.

4: Both are beneficial for humans

What sharks and dolphins serve people? This is quite a shocking question to be answered and to believe it. But yes sharks and dolphins do serve peoples and thus are somehow relatable with each other. Both species have their own way to aid and cure people, dolphins can be trained and provide therapies to autistic children, people with chronic back pain and to cancer patients. Similarly, sharks provide help to the people with their cartilage, as their cartilage is for cancer research purposes and also used as a skin replacement for burns sufferers.

5: Both are terrific swimmers

If you look from a distance, physically the fins of sharks and dolphins seem quite similar, but as you approach them, you will get to know that sharks have the dorsal fins that are broad and straight,  and dolphins have dorsal fins that are curved like an arc. Both are tremendous swimmers as sharks use side to side mechanisms while dolphins use up and down movement of their fins to move through the entire ocean.

6: Both have the ability to camouflage

The color of sharks and dolphins act as camouflage, as the back of both species are of dark gray or blue color while the belly are of light gray or whitish in color. This feature helps them to merge with the ocean color when observed from above or below the ocean.

Sharks and dolphins when viewed from the distance appear alike as many features and adaptations are similar in them because of evolutionary changes. But when observed closely they look different. Hope this article provides you enough knowledge about how sharks and dolphins are relatable to each other to some extent but if you are still confused, why don’t you ask them personally to introduce yourself!