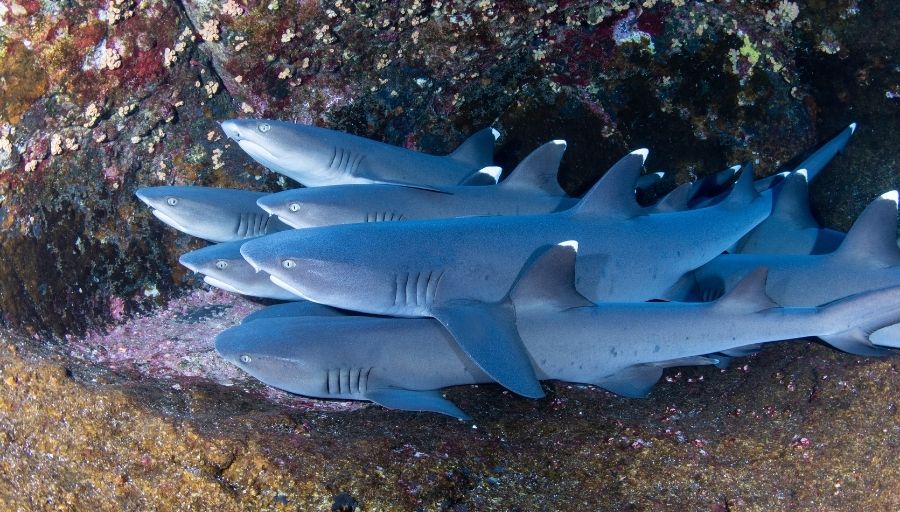 Carcharhiniformes (also known as ground sharks) are found in almost every marine habitat (i.e. different temperatures, topographies, salinity levels areas and depths) on earth. This order of sharks has a particularly long snout, or nose. Carcharhiniformes are known for the adaptability and variability of its members in order to ensure survival in many different circumstances.

Sharks that are of the order Carcharhiniformes are the Blue, Bull, Tiger, Whitetip Reef, Oceanic Whitetip, Blacktip Reef, Caribbean Reef and Grey Reef sharks as well as Houndsharks, Catsharks and Hammerheads. With such members, this group represents a large number of the most fearsome and fascinating of shark species. In fact, the order of carcharhiniformes comprises more than 270 different species within the group.

Different species display different methods of foetal development and gestation. However, all species share internal fertilisation as a feature. Oviparous Carcharhiniformes lay eggs, which are fed off the nourishing yolk within the egg.

The mother will lay her eggs in areas that are relatively safe from predators, but will not care for them or for the pups once hatched. Viviparous species are similar to human beings in that the foetuses are nourished via a placenta and are born alive and well developed. Ovoviviparous Carcharhiniformes involve the hatching of the eggs inside the mother, after which these hatchlings are further nourished within the oviduct until they are developed enough to be born alive.

While most carcharhiniformes in this group favour saltwater and oceanic environments, there are several species that live in estuaries and even freshwater habitats. In a similarly diverse fashion, they may be found in the shallow coastal waters or in the open areas of the most expansive oceans. In general, they prefer the more temperate waters of all three of the major oceans (i.e. the Atlantic, Pacific and Indian).

There has long been a debate regarding the official and scientific classification of carcharhiniformes. In times past, every group was believed to be exclusive. However, recent research focusing on the DNA of the individual species within the families and clades indicates that some may belong to more than one group. As is the case with sharks in general, extensive research is still required in order to uncover the mysteries of these somewhat elusive creatures.