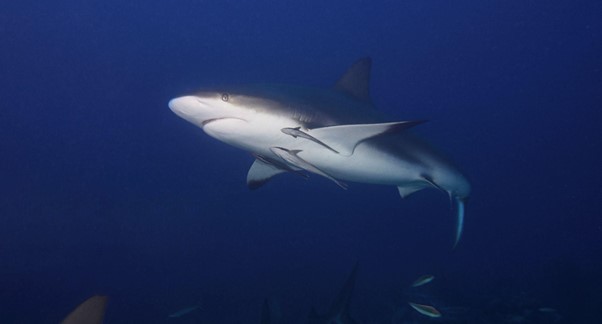 How far can sharks smell the blood? Well thanks to the modern culture and social media that has made people believe a myth that sharks can smell a single drop of blood from a mile away. Sorry to disappoint you but this “fact” is completely wrong. Sharks have a powerful olfactory sense but to smell a drop of blood from a mile away is absolutely incorrect – the prevalent belief about this has been exaggerated!

Now coming towards the next question about how far they are able to smell blood, well the answer may shock you and you have to think so many times before you go in the ocean to enjoy it. So let’s take a deep dive to find out more about it.

How far can a shark smell blood?

Sharks go mad when they smell blood, they have a well-developed olfactory sense, they are capable of smelling the scent of blood from a quarter or a mile away but it doesn’t make sharks smell your blood promptly and makes you a yummy food. The molecules of blood are dispersed in water that are picked up by sharks but the detecting capability of sharks is based on the direction as well as the speed of the water waves. This movement takes quite a long time for molecules of blood to reach the sharks once they are being dispersed in water.

How does the smell reach the sharks?

When you smell something in the air around you, this is because the molecules of the fragrance dissolved in the lining of your nostrils, however, under water the phenomenon is quite different, the molecules of the blood directly dissolved in the water of the ocean. The dissolved molecules move with the water current to reach the sharks, the ocean water carries the scented molecules and travel the distance to reach the nostrils of sharks. It all depends on the type of species and the speed of water tides, the faster the waves move the faster the smell reaches the shark. So if you go for a swim in the ocean and start to bleed, you do have some time to rush back to the shore lines before the shark attacks you!

How do sharks detect the smell of blood?

As you already know that sharks possess a well-developed olfactory system, they have a strong sense of smell as well. Sharks do not have nostrils but they bear nostrils like openings called “nares” that are located underneath their snout. Sharks use their nostrils only for detecting different fragrances because like other mammals, they do not breathe with nostrils and even the nostrils are not linked to the throat and lungs.

Now you must be thinking how do they breathe then? Sharks respire through their gills!

The nares of sharks are lined with small sensory cells called “olfactory epithelium” that can detect the smell of blood molecules that are carried by water waves towards the sharks. Once the smell is sensed by sensory cells of the shark, the information is delivered to the brain, the brain further interprets the smell and helps the sharks to perceive whether it is a smell of prey, predator or mate. After all this, it all up to sharks how they react!

Which shark’s species has the best sense of smell?

The Great White Shark! YES! The great white shark is the species of sharks with one of the best senses of smell. Their sense of smell is so well developed that they can detect a single drop of blood in 100 litres of water and are the only species of shark that can sense blood molecules to a distance of 3 miles. They are blessed with a special organ called olfactory bulb which helps the sharks to detect the blood molecules so precisely and give great white sharks its notorious reputation.

No, sharks are not attracted to human blood, instead they are more attracted to the blood of fishes, sea lions and other water creatures. Sharks rarely attack humans because there is a lot of food in their ocean home to feed, humans are luckily not included in the menu card of sharks but if sharks attack humans it might be due to mistaken identity.

Sharks are the apex predators of the food chain, they have a well developed sense of smell to detect the smell of a blood from a quarter or a mile away. However, they do not detect the smell of blood molecules in a few seconds because the movement of molecules towards the sharks is based on the speed and direction of the water waves, the faster the waves are, the earlier the molecules of blood can reach the sharks for detection.Fortunately, sharks are not attracted to the blood of humans but the blood of ocean creatures like sea lions and other fishes do fascinate the sharks more.