The Orectolobiforme are an extremely diverse group of sharks, made up of individual species of many shapes, sizes, habitats, diets and remarkable physical characteristics. In general, they are identified by their two dorsal fins and a very short, transverse mouth. Below each eye is a spiracle, the size of which depends on the species, which is used for breathing.

The exception to this rule is the Whale Shark, which has a spiracle behind its eye as opposed to below it. The nostrils are recognised by their evident barbels as well as grooves, known as nasoral grooves, which usually connect the nostrils to the mouth.

In addition to the dorsal fins, Orectolobiformes have a tail, or caudal fin, with a fairly well developed upper lobe in line with its body and a lower lobe that is not quite as developed. The Whale Shark is again the exception and displays a well developed lower lobe. 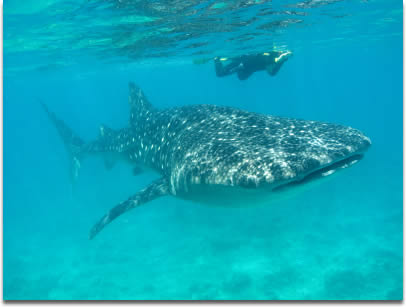 Orectolobiformes only dwell in the saltwater environments of the world’s oceans and seas. They prefer the temperate and tropical areas and swim at a relatively deep level. although they can be found in all of the major oceans, they are rather common in the Indo-West Pacific waters. Because of the tremendous diversity within this group, it is difficult to provide an average size.

The Barbelthroat Carpetshark is the smallest known specimen of the group and measures approximately 30 centimetres (based on only one specimen ever caught). The largest Orectoloboid (and fish in general) is the Whale Shark. This shark, which is thankfully not a predator but feeds on plankton through enormous filters, measures at least 14 metres in length.