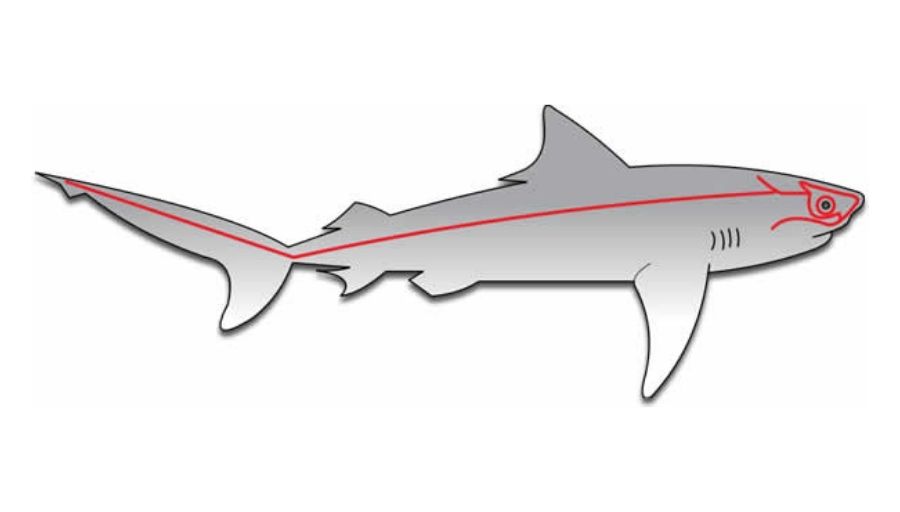 Sharks, because of their existence for millions of years, show huge signs of evolution that helped them survive for so long. Even today, sharks are one of the mightiest and strongest animals. They have gone through many changes throughout these years to be at the top of the food chain today. It’s understandable that they must have some “special” organ and organ functions to do so. Among them is the lateral line of sharks. In this article, we’ll talk about the lateral line of sharks and how it works.

The Ampullae of Lorenzini, or you can say the 6th sense, are specialized cells that sharks have to help them detect electrical fields emitted by their prey. It is one of the many specialized features sharks have that play a huge role in making sharks the apex predators. Their enhanced senses include smell, sound, sight, touch, taste, electroreception, and detecting pressure changes. Let’s discuss how sharks detect changes in pressure with the help of their lateral line.

What is the lateral line?

The lateral line is one of the most complicated vertebrate sensory systems. It is extremely important in many functions, such as the detection of prey, the current speed, and the direction, and providing other important information to the fish living in high tidal areas. It is basically a sensory organ present in sharks that extends mid-laterally through the body length-wise and stretches up to the tail of the fish.

Interestingly, the lateral line is present in all fish. It is simply a hollow sensory organ that has pores in connection with the surrounding parts of the fish skin. In addition to all gish, it is also present in a number of amphibians. The main purpose of the lateral line is to respond to hydrodynamic stimuli, including vibration and water movement.

In simple words, the lateral lines help fish detect things that are nearby. When anything like fish or any other object disrupts the water, ultimately changing the pressure, the other fish detect it with the help of their lateral line (the hydrodynamic stimuli detector). So, anything that comes in the way of a fish at short distances will be detected by them because of this specialized sensory organ.

What is the function of the lateral line?

As mentioned above, the hollow canals called the lateral lines are filled with fluid. The wall of the lateral line has tiny modified hair cells that are instrumental in detecting small vibrations. These specialized structures in fish are so efficient that they are able to detect frequencies that are as low as 25Hz. This information, in addition to the smell, can then be used by the shark or any other fish to hide or hunt for prey.

How does the lateral line work?

The lateral lines are so efficient mainly because of their tiny cell structures. The modified hair cells that line the lateral lines play the main role in detecting pressure around the fish. As the disrupting vibrations come in contact with the tiny hair cells, they get transmitted into the fluid that is present within the lateral line. When these disruptions are swayed into the fluid, nerves send the message to the brain. Information such as the nature and the whereabouts of the vibration is sent to the brain.

In addition to the changes in water pressure and smell plumes, the lateral line can also help sharks in finding potential mates. The nature of the vibrations can tell the fish whether the disruption is caused by a similar fish or prey. It is one of the abilities of sharks and other fish that help them in surviving the harsh ecosystem of the marine environment.

One interesting fact about the importance of the lateral line in the sense of smell of sharks is that if the lateral line of the shark is chemically impaired or covered up, their sense of smell is greatly hindered. This is the situation even when their nostrils aren’t covered at all. In these situations, sharks cannot detect these smell plumes despite the fact their main olfactory organ is functional.

The sense of smell of sharks has been known to be commendable among all animals. A little while ago, marine biologists believed that this was only due to their primary olfactory organs. However, as more is known today about the lateral line, we can conclude that it plays a huge role in the commendable olfactory sense of sharks.

It is of no surprise that the highly refined senses of sharks are what make them one of the strongest creatures on this planet. It’s understandable that when an animal has such effective specialized organs for their senses, they will most definitely be the apex predators of the food chain. In this article, we discussed the lateral line of sharks and how they use them for detecting pressure changes, and how it plays a huge role in their olfactory supremacy.